The County of Putnam was established in January of 1831 as a result of the winter session of the Illinois Legislature (1830-1). At that time, a bill was introduced for “An act to create and organize the counties therein named”. The bill passed without difficulty and provided for the erection of Cook, LaSalle, and Putnam counties. Like many early established counties in Illinois, the County of Putnam was named after a famous figure during the period of the Revolutionary War. That figure was Israel Putnam, who was one of only four generals promoted to the rank of Major General during the Revolutionary War by General George Washington. It is believed that during the famous Battle of Bunker Hill against the British, General Putnam ordered the officers to tell his troops; “Don’t fire ‘til you see the whites of their eyes”. 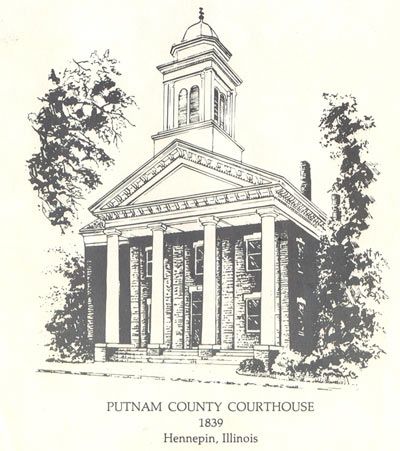 If you ever find yourself passing through our county seat of Hennepin, Illinois, I would cordially invite you to stop by for a visit and a guided tour of our historic courthouse. Our courthouse was built in 1839 and is the oldest courthouse in the State of Illinois that is still in use. Their have been subsequent additions to the original courthouse over the years, but my office and the offices of the Circuit Clerk and Treasurer are still located in the original building where they have been for nearly 175 years. Our courtroom is located on the second floor of the original courthouse and has been maintained in its original form as it was when Abraham Lincoln was riding the 8th Judicial Circuit and practicing law. During your visit, you will have the opportunity to preview the digital copy of a letter written by Abraham Lincoln to Village of Hennepin resident Williamson Durley in 1845. The letter was written to Mr. Durley after Lincoln had personally spoken to him in Hennepin while campaigning for the legislature. Family ancestors have said that Williamson carried the letter on his person until the day he died. The original letter is currently housed in the Abraham Lincoln Presidential Library and Museum in Springfield, Illinois. We recently discovered a number of historical documents kept and hidden away in the old, original courthouse vault. Many of those documents relative to our county’s rich history will be available for your examination during your visit.